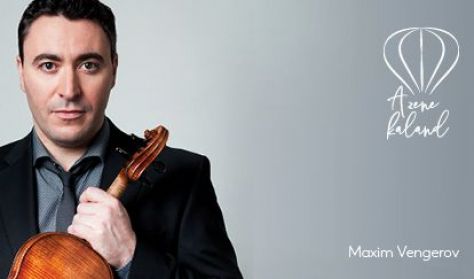 What is it that prompts many great instrumentalists, after decades of success as a soloist and without giving up that career, to also take up the conductor's baton? One presumes it is the need for completeness. After mastering an instrument, one can take control of an entire orchestra – which is the universe itself. To appraise it and direct it: the richness of the interrelationships are like nothing else. Born in Novosibirsk 46 years ago this year and now a resident of Monaco, the violinist Maxim Vengerov became an international superstar of his instrument at quite a young age, but he has also been regularly taking the podium as a conductor for more than a few years.
A former student of legendary teacher Zakhar Bron, the violin virtuoso has long been a favourite of the Budapest audience. On this occasion, however, it will be solely in his capacity as conductor that he will be making his guest appearance at the helm of the Hungarian National Philharmonic Orchestra. His programme features two core Romantic works. Schubert's "Unfinished" Symphony No. 8 from 1822 comprises, instead of the usual four-movement structure, only two movements. Music historians have come up with many different hypotheses as to the reason it remained unfinished, but even today, we still do not know for certain. The work confronts the listener with the duality of a dark, tragic and fatalistic style combined with mellow lyricism. Bruckner's Ninth Symphony, like Beethoven's, was the composer's last effort in the genre. Like Schubert's composition, it also was never completed, because Bruckner died in 1896, before he could finish the finalé. With its rich late Romantic sound and majestic atmosphere, the work reflects Bruckner's deep religious faith – which is also indicated by the naive simplicity with which the composer dedicated the work "to my beloved God".

The title of this concert – "White Nights" – refers to the lands of the north, where the sun never sets during part of the year, and for 24 hours of each day, there is no darkness. What does the "North" mean in our collective consciousness? If we associate the south with a sort of temperamentality, the east with the exoticism of Asian countries, and the west with the development of technology and civilisation, then the north, we would have to say, is a place full of relentless cold and harshness. But when it comes to northern music, which is often also very passionate and energetic, isn't the truth really the exact opposite of all this?
And speaking of cardinal directions, Kristóf Baráti, the soloist for the concert, might also make the audience of this northern concert think of the exciting lands of the south, as he lived in Venezuela between the ages of two and twelve, the period when his musical consciousness was developing. Today the Kossuth Prize-winning violinist is celebrated all over the world, and his repertoire includes every important work written for the instrument. Although the 66-year-old Michael Schønwandt is the pride of the Danish music world, this conductor who is equally at home with the operatic and symphonic repertoires spent his student years at London's Royal Academy of Music. As one of his specialities is the oeuvre of his countryman Carl Nielsen, it is no coincidence that the second part of the concert will feature the Danish composer's third symphony, dating from 1910/11, which is notable for its wordless soprano and baritone solo parts in its second movement. It was Ibsen himself who commissioned his fellow Norwegian Edvard Grieg to write the incidental music for his drama Peer Gynt, a task which the composer took on reluctantly. Nevertheless, the piece eventually became his most popular work. Sibelius's 1904 violin concerto is a similarly popular work that has served for decades as one of the cornerstones of the literature written for the instrument.

The concerto on the programme is a reflection of two important efforts. The first is the recent "re-appropriation" of Baroque music by traditional symphonic orchestras. In recent decades, as the practice of historically informed performance has gained ground, symphonic ensembles have given up performing Baroque works. This repertoire needs to return to symphonic concerts – enhanced, naturally, by the lessons of historically informed performance. The other important effort is nurturing the Hungarian repertoire of the present and recent past.
Bach's Brandenburg Concerto No. 3 and Orchestral Suite No. 2 are two of the loveliest and most widely popular pieces the composer ever wrote – with the latter also being a beloved gem of the musical literature written for the flute as well. Kodály's Psalmus hungaricus, written to text by Mihály Kecskeméti Vég, dates from 1923, the 50th anniversary of the unification of Pest, Buda and Óbuda, and has since become a national relic of Hungarian music history. One of the greatest treasures of Hungarian culture, this work expresses the spiritual world of the nation in a tragicomic voice. László Dubrovay wrote his one-movement cantata Cantata aquilarum ("Song of the Eagles") to a cycle of poems by Tibor Gyurkovics: the patriotic work addresses questions regarding the fate of the Hungarian people and the importance of solidarity. János Bálint is one of Hungary's most outstanding flutists and regularly performs in his home country and abroad as both a soloist and a chamber musician. The noted tenor Attila Fekete, a member of the Hungarian State Opera, has won significant acclaim singing in both operas and oratorios alike. Conductor Zsolt Hamar took on the post of music director of the Hungarian National Philharmonic Orchestra in 2017, after the death of Zoltán Kocsis.


This concert features three enchanting works: two of them will take us to Vienna, the third to Paris. Opening the programme will be one of the most beautiful waltzes ever written, followed by a short piece by Ravel, and closing it will be one of the most important symphonies in the literature of music, a quite lengthy work that includes one of the most popular movements in the symphonic repertoire, which includes a confession of love expressed in musical notes. The French piano concerto being played between the two Viennese works represents the Gallic spirit – but not only that, as the work also owes a great deal to the influence of American jazz.

At this concert, the Hungarian National Philharmonic Orchestra and Zsolt Hamar, its music director since 2017, will welcome one of the most exciting and virtuosic pianists of our time as their guest. Turkish by birth, Fazıl Say has lived in Western Europe for decades and is at home with every style and era of music, imparting a true experience with any work he performs. As the soloist for Ravel's scintillating and austere Piano Concerto in G major, he is sure to be in his element, as he has treated the Hungarian audience to encores of jazz-infused movements at the end of more than one of his concerts here. The Emperor Waltz by "waltz king" Johann Strauss Jr. is an inimitable bit of Vienna, full of charm, grace, elegance and nobility. Mahler's Symphony No. 5, completed in 1902 – a mere dozen years after the 1889 waltz – is, like all of the composer's other efforts in the genre, a dramatic work. It depicts an entire world, leading the listener from a state of mourning to an affirmation of life. Its penultimate movement is the Adagietto, which expresses the composer's feelings for his wife, Alma Schindler. Played independently, it is a popular encore piece in concert halls.