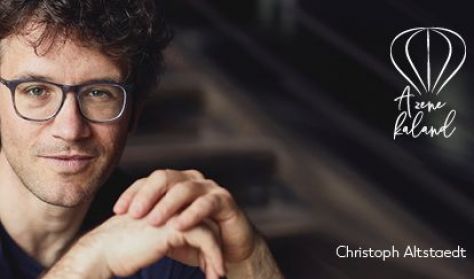 Is it a measure of the worth of a piece of music to be modern, or to have been considered so back in its own time? For a long time, popular opinion said it was indeed. In "better circles", it was normal to give preference to innovative composers and condemn those who were "behind the times". Nowadays we see things differently, looking primarily at the richness of the work's message, the quality of its artistic elaboration, and on its poetry and evocativeness. This concert presents three works that will help the audience ponder precisely these questions of modernity and traditionalism.
Born in Moscow 45 years ago and now based in the United States, Olga Kern is one of the most successful and virtuosic pianists of our time, one who over the course of her career so far has shown intense interest in the Russian repertoire, which is perhaps a good reason for the fact that we'll be hearing her play Rachmaninoff's Piano Concerto No. 3, one of the most popular – and at the same time, most difficult – concert works ever written for her instrument. This composition, typically late Romantic in its melodic and harmonic worlds, was written in 1909, as was Five Orchestral Pieces by Arnold Schönberg, who was born in 1874, making him a year younger than Rachmaninoff. It is a ground-breaking and modern composition that brought new colours and means of expression to the world of music. The two composers therefore interpreted their calling differently: Rachmaninoff spent his entire life in a relationship with tradition, while Schönberg believed in change and developing new techniques and even an entirely new method of composing music. Now we will get to hear and marvel at the music of both composers. In spite of the fact that many people consider Brahms's Symphony No. 4, with its passacaglia in the fourth movement built on a Baroque pattern, as "conservative", Schönberg proved, in a great study published on the centenary of Brahms's birth, that he was nevertheless a forward-looking composer.

How much do we know about Czech music? Many people would answer this question with a confident "a lot", citing Dvořák's Cello Competition and New World Symphony – along with the Vltava movement from Smetena's cycle of symphonic poems Má vlast. The fact is, however, that many pieces of Czech music are rarely or never heard in concerts in Hungary. This exciting concert offers some remedies for this situation, offering more of Smetana's cycle besides Vltava, as well as Janáček's rarely heard Glagolitic (Old Slavic) mass.
The nationalist movements that evolved among smaller ethnic groups in Europe in the 19th century resulted in patriotic-spirited works in most of the branches of the arts, including literature, the fine arts and music. One such effort was Bedřich Smetana's cycle of symphonic poems, Má vlast. Between 1874 and 1879, the composer wrote six independent orchestral works, of which Vltava, named after the river that flows through Prague and much of the rest of the country, became the most famous. Born in Moravia, Leoš Janáček was an enthusiastic supporter of the Pan-Slavic movement, and these sympathies were in part what prompted him to write his Glagolitic Mass in Old Church Slavonic. His work's most characteristic feature is the mixture of both archaic and modern elements. With the Hungarian National Philharmonic Orchestra, Hungarian National Choir and Hungarian and Czech soloist playing the two compositions under the baton of Oliver von Dohnányi, there will be a conductor who is well versed in the Czech repertoire on the podium. Born in 1955 and currently music director of Yekaterinburg's Ural Opera and Ballet Theatre, von Dohnányi is descended from a sibling of an 18th-century ancestor of Ernst von Dohnányi. He studied under Václav Neumann at the Academy of Performing Arts in Prague and under Otmar Suitner at the University of Music and Perform Arts Vienna.

This concert on the Hungarian National Philharmonic's schedule will once again be unified in concept but still varied in content, with a world-famous Russian conductor, an outstanding young Russian cellist and a programme full of Russian composers. And as if this wasn't enough similarities, all of the works being played — although Tchaikovsky wrote his in 1877, Prokofiev his in 1917, and Shostakovich’s dates from 1945 — were created under the spell of the classical style, recreating the lightness and translucent sound that characterised the age of Mozart and Haydn.
At age 88, Vladimir Spivakov is a living legend: after gaining fame as a world-class violin phenomenon as a young man, he later founded the Moscow Virtuosos ensemble, which he has conducted ever since. He is an evocative and fastidious conductor, one upon whom Leonard Bernstein once bestowed his own baton. Alexander Ramm, the soloist performing with the Hungarian National Philharmonic Orchestra, was born in Vladivostock in 1988. He studied at Moscow's Tchaikovsky Conservatory and won a silver medal at the city's International Tchaikovsky Competition in 2015. He has performed with conductors like Vladimir Jurowski and Valery Gergiev and partnered with such musicians as Julian Rachlin and Denis Matsuev. Tchaikovsky's Variations on a Rococo Theme appends eight charmingly light and elegant variations to the composer's own classicizing melody. Prokofiev's Classical Symphony, an early masterpiece of the neoclassical style of the early 20th century, is marked by a degree of lightness similar to that of Shostakovich's playful and humorous Ninth Symphony of three decades later. One of his shortest symphonies, it stands out from the composer's other works in the genre with its carefree mood.

Plenty of connections link the two composers being played in this concert: just like Gustav Mahler, Richard Strauss considered Erich Wolfgang Korngold, his junior by 33 years and the son of renowned Viennese critic Julius Korngold, to be a child genius. Both of them were virtuosos of orchestration and both of them were representatives of Post-Romanticism. The title "Straussiana" has a playful dual meaning, referring to both Richard Strauss and to Johann Strauss Jr., the "waltz king", who was not related to Richard and to whose memory Korngold pays tribute in this late work of his.
Barnabás Kelemen is a world-famous soloist, chamber musician and leader of a string quartet who has performed numerous classical and contemporary works. He has a relation of long standing with the Hungarian National Philharmonic Orchestra, with the Bartók New Series one of its pillars. Bursting with joie de vivre and overflowing with melodiousness, Korngold's Violin Concerto in D major offers an opportunity to marvel at his virtuosity and temperament. Korngold wrote Straussiana, the other work of his that we will be hearing this evening, in 1953, four years before his death, in tribute to the great composer of waltzes, incorporating works Strauss wrote for the stage like Fürstin Ninetta, Cagliostro in Wien and Ritter Pasman. Richard Strauss's youthful symphonic poem Aus Italien is an opulently scored journey of sensual beauty through Rome, Sorrento and Naples. In the finalé, Strauss employs the famous Neapolitan classic Funiculì, Funiculà, erroneously believing it to be a folk song. This mistake led to a copyright infringement suit, which was won by the writer of the song, Luigi Denza. The conductor for the evening, the 41-year-old German maestro Christoph Altstaedt – the older brother of Nicolas Altstaedt, who is a familiar presence here in Hungary as well – is a recognised interpreter of both the operatic and symphonic repertoire.