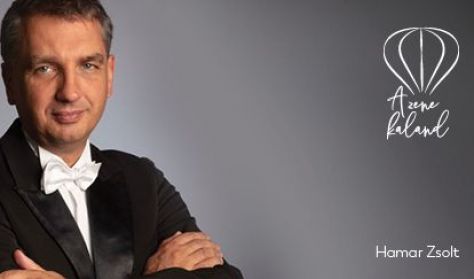 The first piece in the concert is a true delicacy: Ferenc Farkas composed his rarely heard Philharmonic Overture for the 125th anniversary of the establishment of the Budapest Philharmonic. "Symphonic orchestral works make up a relatively tiny proportion of his singularly rich oeuvre, and even fewer are the number of large scale compositions employing a large number of musicians. The maestro wrote two independent overtures altogether, both of them based on commissions: The Festival Overture ordered by the city of Eger was followed a decade later, in 1978, by the Philharmonic Overture," wrote music historian László Gombos.
Sándor Balassa's Double Concerto was born thanks to two commissions: he needed to create both a horn concerto and an oboe concerto. The composer executed the dual task in a single piece. One of the interesting aspects of the work is the fact that the dramatic sounds from the development phase of the first movement of Mozart's Great G minor Symphony are evoked in the second movement. Soloists oboist László Hadady and horn player Szabolcs Zempléni are regular guests at the world's centres of music.
Ernst von Dohnányi's Suite in F minor for full orchestra dates from 1909. The six variations in the first movement, like the work Variations on a Nursery Tune is diverse in terms of both atmosphere and instrumentation, and is full of sparkling ideas. At the end of the second movement, which can be likened to one of Bruckner's scherzos, there can be heard a horn theme that is evocative of the music of Mahler. What made the melody of the romance so magical is the lightness of the scoring. The rondo of the thunderous finalé shows a kinship to the final movement of Mahler's Symphony No. 5, crowning this work that evokes the atmosphere of the fin de siècle.

Leó Weiner's 1906 Serenade for Small Orchestra is a four-movement orchestral piece dedicated to the composer's teacher, János Koessler. The piece was premièred on 3 December 1907, in Cologne. One of Weiner's first compositions, it owes its popularity to its Hungarian sound. This master of classical forms virtuosically employed the twists and turns of verbunkos and "a fine csárdás".
He dedicated his 1959 Harp Concerto to Erzsébet Devescovi, the wife of Pál Járdányi. One critic at the première emphasised that the piece was "essentially lyrical in tone." He went on to write that "this lyricism is not overshadowed by tragic clashes; instead its golden pastel colors are made to glitter more brightly by the ideas contained in the piece. This composition expressed in a single movement creates the impression of a harmonic unity that the composer achieves through its carefully considered structure and successful proportions." Interpreting the harp part this time will be Andrea Vigh.
Miklós Kocsár revised his 1960 piece Capriccio, written for piano, on several occasions. In 2002, after reimagining the piano version, he created yet another orchestral work from it, the fourth time he did so. As the composer put it: "The musical material has not changed, and even in its instrumentation only so far as was absolutely necessary. The main change is one of scope: the scale, as well as the progression of certain sections, became worthier of an orchestral composition than they had been before. […] The other thing that attracts me to this piece is the fact that it represents the full breadth of my knowledge from that time, containing elements of Bartók and Stravinsky."
In the second part of the concert, we'll hear familiar excerpts from Zoltán Kodály's most popular work: Háry János. These will include brilliantly scored orchestral passages that are humorous, ironic and majestic in their lyricism and Hungarian folk songs whose nobility lies in their simplicity. The latter symbolise the pure source that makes Kodály's music eternal.

In 1849, Weimar celebrated the one hundredth anniversary of the birth of Goethe. One of the works they performed was the poet's drama Torquato Tasso, for which Franz Liszt was commissioned to write an overture. The composer, however, took his inspiration not from Goethe's drama, but from Lord Byron's poem The Lament of Tasso, a picture of a poet oppressed by despotism. Liszt set down the work's central motif on a trip to Venice, after he heard the gondoliers there singing the first few lines of Tasso's Jerusalem Delivered. The overture was expanded into a symphonic poem in 1854 through the addition of a quasi Menuetto middle section. Liszt surpassed even Byron, as he closes the work with an image of the poet being glorified in Rome after his death.
The Hungarian composer reworked the Piano Concerto in E-flat major a total of five times between 1836 and 1856 before the piece gained its final form. In the words of Bartók, it was "the first perfect realisation of cyclic sonata form, with common themes being treated on the variation principle." The main reasons for the work's exceptional popularity are the brilliant piano part, the dense format, and the sparkling instrumentation brimming with chamber music influences. The soloist for the evening, Ádám Balogh, took second place at the 2019 Bartók World Competition.
Karl Goldmark's five-movement first symphony, Rustic Wedding, was conceived in the spirit of a programmatic symphony along the lines of those of Berlioz and Liszt, and as a symphonic poem. Completed in 1875, the work was premièred in Vienna by Hans Richter. Brahms had words of praise for the piece: "That is the best thing you have done; clear-cut and faultless, it sprang into being a finished thing, like Minerva from the head of Jupiter."

When the 2600th anniversary of the establishment of the Japanese emperorship came around, the Japanese government opened a competition for a piece of music to celebrate it. The winner was Sándor Veress, who beat out a host of other composers, including Richard Strauss and Benjamin Britten, with his Symphony No. 1, titled Greetings. Veress looked to Bach and Bartók as his guiding lights. The spirits of these two composers are reflected in the work in the sense of the contrapuntal structure of the former and, in the case of the latter, the use of his birthright to the treasures of Hungarian folk music.
In Ernst von Dohnányi's Concert Piece, few of the parts for solo instruments are actually solos. The work consists of three movements linked to each other with attaccas, transitioning from the moderate tempo of the first to the scherzo of the second, and then on to the final Adagio. Although the work was dedicated to the noted German cellist Hugo Becker, one can also surmise that the Hungarian composer was also "addressing" it to his own father, Frigyes Dohnányi, an outstanding cellist in his own right.
László Lajtha wrote his Fourth Symphony in 1951, during the darkest days of Hungary's suffering under communist leader Mátyás Rákosi. None of the horror of these circumstances shows up in this piece: instead, Lajtha wrote a brilliantly pure work full of serenity. The two quick movements, the Allegro molto and the Vivace, frame the dance-like meditation and melancholy of the Allegretto. The final movement is suitably named Spring: written in a 6/8 time signature, it is an opulently scored circle dance of sweeping power.
Zoltán Kodály wrote his Concerto for Orchestra in 1939/40 after receiving a commission from the Chicago Symphony Orchestra to write a composition celebrating the 50th anniversary of the ensemble's establishment. The work was premièred on 6 February 1941, under the baton of Frederick Stock. The work consists of a single sprawling movement spread across five sections: the allegro moderato tempo of the beginning reappears in the third and fifth sections. The second and fourth parts are a lyrical largo.