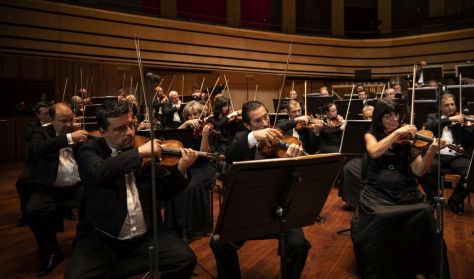 Brahms, Koessler, Dohnányi – almost like members of the same family. Not biologically
speaking, of course. Brahms is the grandfather. He was a towering figure in the second half of
the 19th century. He was a believer in so-called "absolute" music without any related
programme. But he still sometimes hid secret messages in his work. The start of his Symphony
No. 3, for example, is obviously about Man and Woman. The Man is overflowing with
passion, while the Woman is an ethereal phenomenon. A little fairy – in the sense of how an
ageing bachelor imagines her. Twenty years younger than Brahms, János (otherwise known as
Hans) Koessler, the creator of Symphonic Variations, is the son. Brahms is his role model: he
even resembled him outwardly, wearing a bushy beard. For decades, he served as a professor
of music composition at the Franz Liszt Academy of Music. He taught in German, in the spirit
of the German tradition. This was somewhat irritating for Bartók and Kodály, but not for
Dohnányi. He is a true musical grandson. When the proud teacher Koessler showed
Dohnányi's Piano Quintet, his first opus, to Brahms, the elder composer is said to have
murmured: "I could scarcely have written it better myself" . Then the decades passed.
Dohnányi's style changed a great deal. But the Brahmsian legacy could still be felt in the
relatively late work Stabat Mater, which he composed in the United States. Some music
historians consider this to be Dohnányi's finest work, although this assessment is debatable.
Nevertheless, hearing works by the three composers together certainly promises to be an
extraordinary experience.