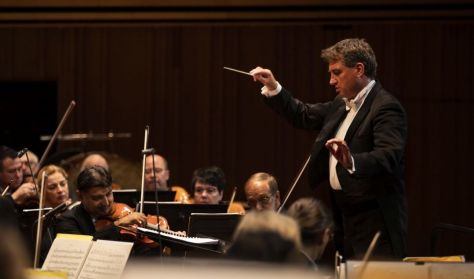 For this early spring concert, the listener is invited on an extraordinary hike.

For this early spring concert, the listener is invited on an extraordinary hike. Our first
destination is Switzerland. Here you will find a picturesque valley (that goes by the name of
Val d’Anniviers), where, according to legend, a part of Attila the Hun&#39;s army that had left the
main body found refuge after the Battle of the Catalaunian Plains (451 AD). There is some
doubt about the veracity of the story, of course, but it is certainly true that in certain exterior
characteristics the people who live here differ from the residents of nearby areas, something
that the philosopher Rousseau noted in his own time. Sándor Balassa&#39;s fantasy was inspired
by the story and the beautiful landscape, which form the setting for Valley of the Huns, a piece
written for two soloists (flute, horn) and a string ensemble. After Switzerland, we can journey
through our imagination to Jurassic Park with the sounds of László Dubrovay&#39;s Triple
Concerto, written for trumpet, trombone, tuba and orchestra. It is as if enormous dinosaurs are
stepping and stomping among us. Then an entertaining dance breaks out. Who would have
thought brass instruments were capable of so many different types of sound! The last stop on
our hiking tour is rather less exotic, but no less appealing. Sun-kissed Italy is brought to life
through the melodies of the young Mendelssohn.