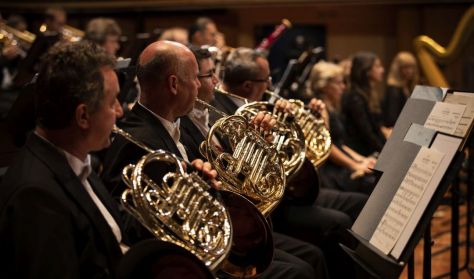 When Hungarians think of the years 1848 and 1849, they think of revolution, the fight for
freedom and defeat. Robert Schumann had always been enthusiastic about new ideas, but
during this time period, his passion had subsided. He experienced tormented visions and,
according to contemporary accounts, he was suffering hallucinations even as he wrote the
theatrical incidental music for Lord Byron's Manfred (1848). Today, it is the overture from
that piece that is typically performed in concert. The following year, Schumann became
utterly embittered by events. He couldn't understand why the huge political turmoil in
Dresden was being led by a musician. This restive musician was Richard Wagner, who
subsequently had to flee from German soil. Schumann sought refuge from this uncomfortable
reality in composition. He wrote several pieces, including a concert piece for four horns and
orchestra. It is the music of the German forest and hunting. In a strange coincidence, that
same year might have seen the first performance of the Symphony No. 4 in C minor of a
masterful young composer who would pass away at a young age. Yet like so many of
Schubert's creations, this work was left forgotten for more than 30 years. We would describe
this situation as "tragic", except the composer himself already used the term as his name for
the piece. The fate of the opening piece for this concert, the Fantasy in F minor, was
somewhat less tragic. Pianists have always loved this work of Schubert's. Dohnányi, for
example, loved it so much that he arranged it for full orchestra.